Jeff Foley helps successful leaders get even better by achieving positive and lasting change in behaviors for themselves and their people. He does this through individual coaching, seminars, and large group presentations all designed to meet the priority needs of the organization. Results achieved include more competent, confident leaders better able to increase the performance of their organization.

He graduated from West Point and served 32 years in the United States Army earning the rank of Brigadier General. The foundation for expertise lies in his military experience leading teams of up to 8000 people. Throughout his military career he served in leadership positions around the world. He thrived in constantly changing environments, adapting to new organizations, all the time focused on the accomplishment of the mission and developing people.

He is an author, leadership coach, and speaker. His latest book is BRAVE Business Leadership: Grow Competent, Confident Leaders and Get Great Results. This new book captures best practices from what he learned from his thirty-two years in the army. He is certified as a Marshall Goldsmith Stakeholder Centered Executive Coach (TM). He is a partner with the Ken Blanchard Companies, the Wiley Corporation (5 Behaviors of an Effective Team (TM)), and with Jim Horan’s One-Page Business Plan (TM) company. He co-authored the Penguin published book Rules and Tools for Leaders (4th Edition) a down-to-earth practical guide for leaders. He is also a contributing author to the book Servant Leadership in Action (edited by Ken Blanchard and Renee Broadwell, 2018).

Upon completion of military service, he spent two and one-half years as an executive administrator with Augusta State University and later with Georgia Regents University, both in Augusta, Georgia. 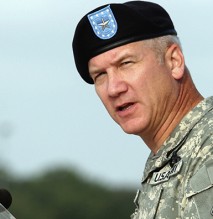 Jeff played intercollegiate sports at West Point, is an Eagle Scout, and a Distinguished Alum from Mariemont High School. He holds masters degrees in Computer Systems and National Security Policy, and an Honorary Doctorate of Humane Letters from Union Institute and University. He resides in Augusta, Georgia, but remains an avid Cincinnati sports fan. He serves on four local and national boards. The most significant award he received as a Soldier was the opportunity to serve his country.